The landscaper team trooped through my front door, heading for the kitchen to discuss final plans for my ailing front yard.  Straight ahead of the gang, oh lord, there was my bra hanging with perfect visibility from on the newel post of the stairway railing, beige material on black wrought iron.  Obviously, no one mentioned it, but believe me, it was plain as day.

Why was it there?  Three weeks prior, in anticipation of company coming, I moved it from the downstairs bathroom to base of stairway in preparation for a final journey upstairs to a drawer.  A new use for newel posts, a lingering storage spot for lingerie!

No charge for library books

This is more like a menopause morning than a moment.


I think of myself as a low level techno-babe in the sense that I not only have a Kindle, but I know how to borrow and download books from the library on the device.  The only problem with this strategy is the fact that all the books which I've placed on hold tend to show up all at once.


One day last week, it was finally my turn for "The Signature of All Things".  My Kindle, so long idle, needed charging prior to the download.  I grabbed the charging cord from its usual spot where it was uncharacteristically placed, then headed off to the computer where I looked in on Facebook, read e-mail, studied Spanish, and browsed Amazon.


Oh right, I wanted to charge my Kindle which awaited my discovery in the third place I looked.  Back to the computer, but no cord in sight.  Walked around the house looking for the cord, had a hot flash after going up and down several flights of stairs in search of same, ended up cleaning off my desk upstairs, then off to the kitchen to make lunch.  Remembered the missing cord, restarted the hunt looking in all the same places, and finally found it hiding in plain sight on a table next to my clean desk where I'd doubtless lost interest in it and left it while grabbing my Spanish book.


Back to the computer where there was no Kindle.  Finally, after adding 14 flights of stairs to my daily total on my pedometer (did I mention I'm a techno-babe?), I was ready for the charge and the download.


And I didn't even like "The Signature of All Things".
Posted by denverdoc at 10:57 AM No comments:

A decade into menopause, and I'm still hot (no, not that kind of hot, just middle-of-the-night way too warm hot).  For ten years I weighed estrogen pluses, namely good for the bones, brain, and heart, with estrogen negatives, that nagging worry regarding breast health, and I revisited that analysis annually.  Just this past year, estrogen yikes overtook estrogen yay, and I dropped my weekly dose to just a tick over negligible.  And subsequently lost two checks, a zillion pens, one notebook, my pedometer, my keys again and again, 5 pounds of muscle, and 1/2 inch of height.


Enter a new kid on the menopausal treatment list, a so-called TSEC or tissue selective estrogen complex, also known by the not-so-catchy name of Duavee.  It was approved in October, 2013, but I only found out about it in the March issue of the journal "Menopause" which featured a long article and accompanying editorial about this drug.


Duavee is a combo drug, a pharmaceutical 'two-fer'.  It contains Premarin (no, I don't love that about it either, but more on that later) and bazedoxifine which is not approved as a stand-alone drug in the U.S. although it is available in Europe.  Each of these drugs interact with estrogen receptors in the body, but while Premarin stimulates the 'on switch' when it couples with cellular receptors, bazedoxifene turns some estrogen receptors on and some of them off depending on the specific tissue involved.  It is one of a class of drugs called selective estrogen receptor modulators (SERMs).


Tamoxifen is also a SERM long-used to decrease risk of estrogen-receptor positive breast cancer or to prevent its recurrence. Tamoxifen, unfortunately, stimulates estrogen receptors in the uterus, thus increasing risk of uterine cancer, and some women do not like the way they feel when they're on it.  Another SERM that's been around for awhile is raloxifene or Evista which is prescribed for the prevention and treatment of osteoporosis.    Evista works well on preserving bone density, protects the breast against estrogen stimulation, but aggravates hot flashes.


The ideal treatment for the health challenges of menopause would turn on all the right estrogen receptors (bone, brain, vascular tissue, genitalia) and would turn off those better left quiescent in aging ladies (breast and uterus).  Estrogen works wonders on hot flashes also known vasomotor symptoms; in fact, it's the very thing.  It supports bone density and has a number of favorable effects on brain and cardiovascular health.  Unfortunately for women no longer in their reproductive years, it stimulates breast and uterine tissue in an unwanted sort of proliferative way that, over many years, increases risk of cancer and fibroids.  As a result, progesterone is added to hormone regimens to offset the estrogenic stimulation to the uterus, but this addition only increases the breast cancer risk.  In addition, the effect of oral estrogen, particularly non-human oral estrogen such as Premarin, has undesirable effects on inflammation and clotting in the body.  While many women did well for many years on the combo drug known as Prempro, the results of the Women's Health Initiative reported in 2002 included significant increases in incidence of stroke, heart attacks, breast cancer, and dementia in women on the Premarin/progesterone combination.  Of note, however, is that women taking only Premarin did not experience an increased risk of breast cancer.  Nevertheless, this study drastically changed prevailing opinion on the benefits of post-menopausal hormone therapy, and its use has since dramatically dropped.


The combination of bazedoxifene and estrogen is just short of perfect.  The estrogen component decreases hot flashes although the dose is lower than ideal to completely beat not only the heat but also genital atrophy (as in painful intercourse).  Better yet would be bazedoxifene all by itself to be used along with an estrogen skin patch.  For now, however, as I work on my personal equation of health goals vs. personal fears, Duavee gets a tentative one to two thumbs up.


Interested in more insider scoops on good health choices for the rest of your life?  Stay tuned for September announcements on small group seminars on menopause, osteoporosis, and cardiovascular health.
Posted by denverdoc at 7:28 PM 2 comments:

A "Cat in the Hat" moment

Honey, I love you, but this is entirely too much of a good thing.

With some difficulty,
I scooped semi-crystallized honey
with a knife
out of the jar
and onto my yogurt.

A large glop fell to the floor
as I reached for a spoon
to scrape it off of the knife.
I swiped at the blob,
then moved to the table
in order to eat.

A newspaper clung to the drips
on my sleeve,
my shoes made soft sucking noises
as I walked to the sink
'cross honey-streaked floor.
My husband pointed out a
huge gooey dollop on a counter
not even in range of the honey affair.
Posted by denverdoc at 8:58 PM 1 comment:

Have you ever wondered if you can put a styrofoam cup directly on the warming pad of the motel coffeemakers to catch the hot water?  The answer is no!
Posted by denverdoc at 7:06 AM 1 comment:

"For What It's Worth" 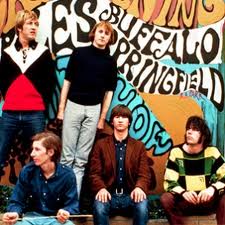 My good friend and I lingered over breakfast at a nearby restaurant.  We've known each other since freshman year of college, 43 years!  The best Buffalo Springfield song ever came on overhead, and we both instantly got tears in our eyes.  Time it was, and what a time it was...
Posted by denverdoc at 1:41 PM No comments:

I slipped back into the house after picking up the paper early one morning.  Catching my reflection in the front hall mirror, I smiled broadly.  Looking good in the half-light of dawn, I thought with satisfaction... 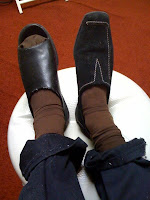 I tried not to stare at my patient's feet as we discussed her medical condition. I couldn't help wondering, however, me being a doctor and all, whether or not there was something wrong with her left foot. Was that an orthopedic old lady shoe styled for grandmas with bunions?

When she settled onto the exam table, she smiled and stretched out her feet. "I couldn't find black socks this morning, so I settled for brown. But I didn't notice that I had two different shoes on 'til I got to the office--I'm hoping everyone assumed I wore this other shoe because my foot hurts."

Later that afternoon, I recounted this story to another like-minded (or no-minded?) old soul. She laughed, then cleared her throat and said with an apologetic smile "Did you know that your sweater is tucked into your pants in the back."

Good lord, couldn't remember just when I'd gone to the restroom, but I hoped that everyone assumed this partial tuck was part of a deliberate look.
Posted by denverdoc at 10:44 AM 4 comments: 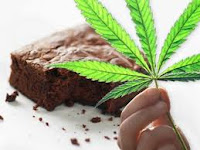 Text from teen: So when will the brownies take effect?
Text from mom: Well they must already be working because you just texted your mom. I'll be right there to pick you up.
Posted by denverdoc at 7:51 PM 3 comments:

Got a menopause moment of your own?

Send questions, comments, or personal menopause moments for posting on this blog to denverdoconline@gmail.com.